Folkadu is a music ensemble that has been inviting audiences on a variety of occasions on a journey through the musical and cultural world of Israel since 2017. The songs are not only of traditional klezmer origin, but also go back to the 1960s of Israeli folklore, right up to modern times. The songs are being sang in the different Jewish languages ​​(Hebrew, Yiddish, Ladino).

The group is characterized by its extraordinary instrumental line-up. The singing is accompanied by the accordion, the oud and the darbuka, which connect us to the unexpected sounds of the Middle East, as well as the shofar and the trumpet, which symbolize the bridge between Jewish tradition and the sound of Western music. The ensemble gives a short introduction to each piece in order to bring the audience understanding the story of its creation and the emotional context better.

In 2017 the group was accepted into the YEHUDI MENUHIN Live Music Now Munich funding program. In this context, they are primarily involved in the social sector, e.g. in old people’s houses, children psychiatric centers, prisons, homeless shelters, addictive facilities, in hospice etc.

Since 2018, the ensemble has been regularly engaged for events by the Central Council of Jews in Germany (Zentralrat der Juden).

Folkadu performs for Jewish, Christian and Muslim communities and wants to make a contribution to interreligious dialogue. 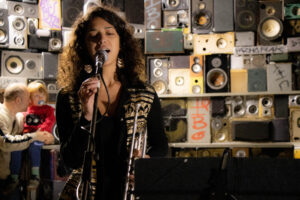 Yael Gat was born in Haifa, Israel. She began her musical education at the age of 11 studying trumpet. At the age of 18, Yael was chosen for the “Outstanding Musician” program and joined the Army Orchestra playing there as principle trumpet for two years. After finishing her army service she started her high musical education and graduated receiving her Bachelor (B.Mus) in trumpet performance from “The Buchmann-Mehta School of Music” at Tel Aviv University in Israel in the class of Eran Reemy.

During the years 2013-2016 she studied in Munich, Germany at the University of Music and Performing Arts Munich, where she graduated with honors her Master degree (M.Mus) in the class of Prof. Hannes Läubin and Prof. Thomas Kiechle, both are leading trumpet players at The Bavarian Radio Symphony Orchestra in Munich.

During this time she founded Duo Folkadu (now Trio), where she plays trumpet and singing being accompanied by the accordion.
Today Yael Gat lives in Berlin. She works as a music teacher in a Jewish school and as a trumpet teacher at a Music Conservatory. As a freelance musician, she works with numerous artists across Germany, playing an extensive repertoire from classical music to modern electronic music.